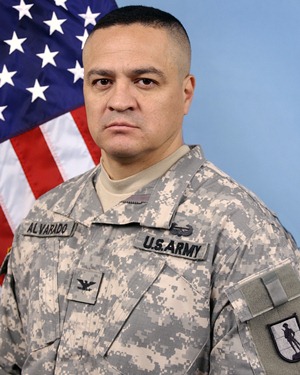 Lieutenant Colonel Walter Alvarado served as battalion commander of the 50th Personnel Services Battalion of the New Jersey National Guard when the battalion deployed in Afghanistan from March 2006 to March 2007 during Operation Enduring Freedom.  At the time of his interview, Alvarado was serving at Joint Force Headquarters, Fort Dix, NJ, as the Deputy G-1 or personnel officer.

An Ecuadorian immigrant, Walter Alvarado was the first of his family to attend college as well as the first to serve in the United States military.  When he initially matriculated at Niagara University, Alvarado was impressed by the bearing and attitude of the school’s ROTC cadets, which convinced him that the military was something he wanted to be a part of, and so he joined the program.

Alvarado recalled that during his ROTC years in the mid-1980s, the Cold War was reaching its climax, and President Ronald Reagan was increasing the size and capability of the United States military, which Alvarado viewed as a stark contrast to the policies of the previous Carter administration.  Alvarado stated that he thought that the American people had lost faith in their military during the long Iran Hostage Crisis, and that Reagan had restored that faith.

Alvarado graduated from Niagara University with a degree in political science.  He was commissioned as an infantry second lieutenant in the New Jersey National Guard and was assigned as a platoon leader in Alpha Company of the New Jersey Guard’s 2nd Battalion, 113th Infantry, located in Newark.  Alvarado recalled that he learned valuable lessons in effective leadership commanding that infantry platoon.  From his very first annual training, he experienced the responsibilities of a leadership position, realizing that his soldiers would both depend on him and test him.  He concluded that people respected those who made decisions with confidence, and that his mission was to prepare himself and his men for possible deployment to a war zone, although his own eventual deployment would not come for two decades.

When Alvarado first joined the National Guard, deployment seemed unlikely, as the Guard was considered a strategic reserve force which would not be called to active duty unless the nation was involved in a large scale war. He noted that Operations Desert Storm and Desert Shield, in which National Guard units were called to active duty, proved to be turning points in the Guard’s modern history, however, gaining the organization new respect as deployed units rose to the occasion, and the National Guard became a vital cog in the nation’s defense.

In 1988, Alvarado was transferred to a National Guard unit in Jersey City. From 1991 to 1993 he was assigned to the 50th Main Support Battalion based in Lodi, New Jersey and in 1996 joined the 42nd Division Support Command.  From 1999 to 2001 he served as a recruiting and retention officer at Fort Dix and then as readiness officer, moving on to the position of executive officer of the 57th Troop Command in Atlantic City, and then battalion commander of the 50th Personnel Service Battalion.

On the fateful morning of September 11, 2001 Lieutenant Colonel Alvarado was at Fort Dix preparing for a quarterly staff meeting.  He began to receive calls from people saying they were going to be late because of the immense amount of traffic on the New Jersey Turnpike, and then Master Sergeant Tony Morton called to say that he could see the World Trade Center on fire.  At the time, no one knew what had happened.  Alvarado’s initial thought was that a plane had accidentally crashed into the building; he turned on the television news for an update in time to see the second plane crash into the other tower — and immediately realized that the crashes were acts of terrorism.

Alvarado’s brigade was committed to do a rotation in Bosnia on a peacekeeping mission, but those plans soon changed after 9/11, as the National Guard’s assignment shifted from peacekeeping efforts to fighting the Global War on Terrorism.  In addition to getting an inside view of the effects of  the events of 9/11 through his position, Alvarado also noted that the civilian population fully embraced the troops, supporting the nation’s armed forces in hope of  restoring security to the nation.  He recalled that most Americans lived in fear in the immediate post 9/11 world and believed that it was important to take the fight overseas to ensure that America would not be attacked again.

The importance of maintaining the American people’s faith in the military provided the focal point of the National Guard’s work in the wake of 9/11.  Alvarado stated that the influx of young recruits into the military that resulted was immensely important to the war effort, and their impact is still being felt today.  He pointed out that many of the soldiers who enlisted following 9/11 provided the backbone of military operations at the time of his interview, and said that he was incredibly impressed by their motivation and positive attitude.  He noted that he and his soldiers wanted to make sure that the legacy of their service, at home and abroad, was one of success.

When Alvarado received word that he was being deployed to Afghanistan, he viewed it as an opportunity and accepted the assignment as a chance to actively make a difference while serving his country.  As a battalion commander, Alvarado knew that he would have to be strong, not only for himself, but for those who depended on him.  He viewed overseas duty as part of the job he had signed on to do, and said that deployments are in many ways harder on the soldiers’ families than on the soldiers themselves, since the families have to go on living their lives and continuing to function as they had before, despite the absence of a loved one for periods that sometimes exceeded a year.

On his way to Afghanistan, Alvarado landed in Manas, Kyrgyszstan, where he and his soldiers remained for four days, before moving on to Afghanistan after their “body clocks” adjusted to the eight and a half hour time zone difference between Afghanistan and the United States. Manas also provided a calm before the storm of entering the combat zone. From Manas, the soldiers flew on tactical aircraft to Bagram Airfield, near Kabul.  As soon as the plane touched ground, Alvarado realized that he was going to work every single day, as hard as he could, to complete the battalion’s mission.

Alvarado recalled the daily schedule at Bagram Airfield for the interviewer:


Most of Alvarado’s responsibility in the combat zone revolved around the brigade postal services.  Soldiers needed consistency and predictability when it came to receiving their mail, and Alvarado made sure that this system ran smoothly. Soldiers in the field would receive mail every seven days, although there were occasional delays due to bad weather or lack of air transport.

The 50th Personnel Services Battalion also had to maintain the brigade casualty processing operation. Soldiers killed in action on the Afghan battlefield were sent to Alvarado’s battalion for processing on the way back to the United States.  The battalion prepared and transmitted information on the deceased to the Casualty Systems Command in Kuwait.  Alvarado personally reviewed the case of every single soldier who lost his or her life in the Afghanistan region during his tour there.  He recalled that it was a particularly sad experience because he witnessed firsthand the real toll of war.

Alvarado said that the morale of his battalion actually improved as the tour of duty progressed, since his soldiers realized they were fulfilling a vital mission, supporting and assisting other soldiers who were putting their lives on the line every day, and, at the same time, were aware that what they were doing in Bagram was an easier task than what the actual war fighters were doing out in the field.

Alvarado’s encounters with the Afghan people were positive in nature, and he even received some feedback from them on how they perceived the US military.  According to Alvarado, he had a conversation with an Afghan man in which he said that the Afghan people respected what the US was doing there, but that he would need a little more time to decide if the US intervention would have any permanent positive influence on his country.  Alvarado said it was important to make sure that the Afghan people did not just see the US’s involvement overseas as America’s task, but as providing an assist to what had to ultimately be an Afghan effort.  He said that an Afghan government, elected and run by the Afghan people, would ultimately be the best thing for Afghanistan.

For the last three months of his time in Afghanistan, Alvarado’s operation worked under overall NATO command.  He also recalled working alongside military men from South Korea, who he considered outstanding soldiers, tremendous teammates, and great human beings.  The South Korean military, he recalled, was extremely professional at all times and had a very similar structure to the US military.

One instance that resonated in Alvarado’s memory of his time in Afghanistan was the Thanksgiving Day dinner the battalion held a month and a half before returning home. The intent of the dinner was to offer some consolation to the soldiers for not being able to be with their families.   It also provided an occasion for Alvarado to stress to his soldiers that they were performing a very important mission for their country, and that they were taking this opportunity to have a gathering in order to band together as a military community, and to focus on the fact that they would be getting home in a little more than a month.

After considering his varied assignments in the New Jersey National Guard, Alvarado said that he had no greater sense of accomplishment than in leading the men and women of his battalion in a combat zone, and, consequently, his favorite military job was as a battalion commander in Afghanistan.  It proved the most demanding of all his career assignments, but at the same time was the most rewarding. Alvarado said he believed that supporting combat operations was an honor, because it directly backed up the men and women who were risking their lives to protect the United States.