The American Civil War brought about numerous advancements in military technology. Innovations such as the repeating rifle, the Gatling gun, and the ironclad warship would transform battlefields of the 19th Century dramatically. In addition to advancements in land and naval surface combat, an entire new domain of warfare was explored as well; the development of submarines would turn the undersea environment into a battlespace for the first time.

Both the Union and Confederacy had an interest in developing submarines to undermine each other’s efforts. The Union needed a way to clear underwater obstructions protecting Confederate ports and clear the way to assault them, while the Confederates needed a weapon capable of penetrating the Union naval blockade. The Confederates designed a nine-man submarine, the Hunley, which in 1863 was deployed against Union forces near Charleston, South Carolina. During testing it sunk with loss of life and was raised three times. On its fourth mission, the Hunley finally had success, using a spar torpedo (an explosive attached to the end of a long pole on the bow) to sink the Union sloop-of-war Housatonic. The explosion of the torpedo also destroyed the Hunley itself. This time the submarine was left on the seabed until it was rediscovered and raised in 2000 to be made into a museum display.

History of the Whale

Less known, however, is the story of the Hunley’s Union counterpart, the Intelligent Whale. In 1863, engineer Scovel Merriam approached the US government with a proposal to design and build a submarine. With consent from Secretary of War Gideon Welles and a $15,000 budget, Merriam’s recently founded American Submarine Company soon got to work. Merriam also obtained the financial support of New Jersey businessmen and their representative Oliver “Pet” Halsted. Halsted had connections in the Lincoln administration and used them to his advantage, effectively becoming America’s first big time lobbyist. He petitioned the Navy, and even President Lincoln himself on behalf of Merriam’s design.

In 1864, Merriam completed the Intelligent Whale, most of which was built in Newark, New Jersey. The vessel was tested in the Long Island sound and initially appeared to be successful, but at the time the Navy was not sufficiently interested. (The failure of an unrelated 1862 submarine design, the Alligator, had already left a bad image of submersible technology to the Navy.) Unable to sell the vessel to the navy, Halsted bought it himself and moved it to the Passaic River in Newark, where it was docked for several years. Halsted tried to sell it to Irish Revolutionaries but was unsuccessful, before the Navy finally decided to purchase it in 1866.

The Intelligent Whale was transported to the Brooklyn Navy Yard, but was not tested until 1871, with limited success. However, after the death of Halsted in 1871, who had been the driving force behind the development of the project since his involvement began, the Navy’s enthusiasm with the Intelligent Whale waned. In 1872 the submarine was tested again, but this time it became caught underneath a dock and began to leak water. At this point, the Navy judged the projected to be a failure and its development was terminated.

The Intelligent Whale remained as a lawn ornament at the Brooklyn Navy Yard before it was moved to the Washington Navy Yard on the closing of the Brooklyn base. The Navy loaned it to the New Jersey National Guard Militia Museum in 1999.

Though the Intelligent Whale itself did not see practical service, it was a significant development in American military history. The Intelligent Whale provided a physical basis as well as an engineering inspiration for future submarine designs. Just several years later, John L. Lay developed a highly successful self-propelled, remote-controlled torpedo. Further engineering would culminate in the commissioning of the Navy’s first operational submarine, the USS Holland, developed by John Holland of Paterson, New Jersey, in 1900.

Anatomy of the Whale

The Intelligent Whale was crewed by six men, four of whom drove a massive crank which turned the boat’s propeller. The cupola atop the submarine has several viewing holes for the crew to look out of. Each viewport is cone-shaped and tapers to a tiny hole on the exterior. In addition, on each side of the submarine are two “eye-socket” viewports, one fore and one aft.

The hole where the set of stairs are located currently had a door which could be opened during underwater operations. Using two large internal air tanks, the pressure inside of the submarine could be kept greater than the pressure of the water, allowing a diver to exit the craft safely. The diver, connected by lines to the air tanks inside the submarine, could walk along the seabed and place an explosive mine on an enemy ship or remove a mine or obstacle before returning. Though the Intelligent Whale was never used in this combat capacity, Halsted allegedly took his family on trips in the submarine and used this method to explore the bottom of the Passaic River. 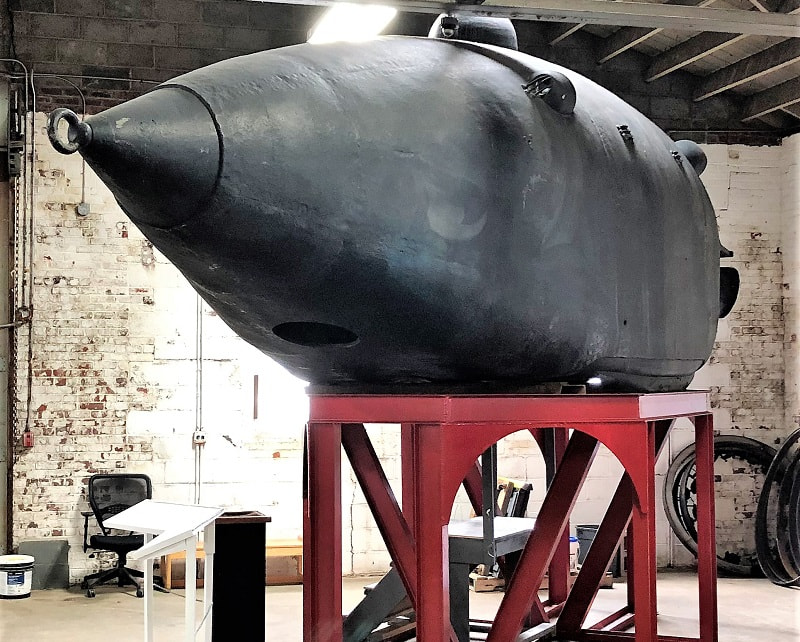 July 28, 1861
Ensign Henry K. Zehner of the Third New Jersey Militia regiment died of “debility” at Washington, DC. Zehner was the first New Jersey officer to die in the Civil War. His body was returned to New Jersey and he was buried in Mercer Cemetery in Trenton.

July 27, 1777
Robert Erskine, engineer and ironmaster at Ringwood Ironworks, was appointed as Geographer and Surveyor General of the Continental Army by George Washington.

In May 1945, the German submarine U858 surrendered off Cape May, NJ. The photo shows a "prize crew" of US sailors on their way to take the surrender.

The 112th Artillery Regiment, a NJ National Guard unit called to active duty in 1940, was one of the last horse drawn artillery units in the Army.

World War I veterans returning home in 1919 on the docks of Hoboken, NJ.

The NJ National Guard's 165th Field Artillery, part of the parade at Fort Dix in honor of Secretary of the Navy Frank Knox at the 78th Division reunion in May, 1941.