Samuel Kaye was born in Lebanon, Connecticut in May, 1924, the son of a motion picture projectionist.  He recalls that upon the outbreak of World War II, one of his high school teachers told the class that, of those who went to war, some would not return.  Despite this caution, Kaye enlisted in the Army’s active reserve, attending Radio School, and on November 10, 1943 joined the United States Army Signal Corps. He attended basic training at the New Jersey National Guard Training Center in Sea Girt, New Jersey.

Kaye came from a family with a long tradition of military service.  His father and grandfather had served in the army and, during World War II, his two brothers and sister also enlisted.  His sister Dorothy joined the Women’s Auxiliary Coast Guard as a SPAR (a nickname based on the Coast Guard motto Semper Paratus (Always Ready) at age 19, and she was stationed in Washington, DC. Kaye’s older brother Murray joined the Citizens Military Training Corps (CMTC) prior to the outbreak of the war and was an officer serving with the First Infantry Division at the time of Pearl Harbor. Murray served in Europe and later in Korea.  Their younger brother Charles enlisted at age 17 and was assigned to the Eighty-Seventh Infantry Division.  Charles was wounded by shrapnel during the crossing of the Rhine River, but he recovered. 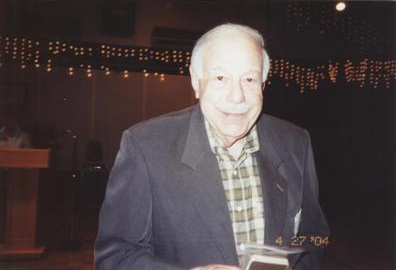 Upon completion of basic training, Kaye was assigned to Paramount Studios in Astoria, New York, where he received twenty-eight weeks of training in motion picture projector repair.  The army assigned him to duty as a projectionist in army theaters for a brief period, and they then sent him to Bell and Howell and RCA for further training, which lasted a year.  In March 1944 Kaye boarded the British ocean liner Queen Elizabeth (which was converted to a troop transport for the war) enroute to Scotland. He remarked that the famed boxer Joe Louis was on the same ship.

After arrival in Scotland and assignment to the 3273rd Signal Film Library Detachment, Kaye was stationed near an Eighth Air Force base, where he observed B-17 bombers returning from missions, all shot to pieces; some were on fire and crashed landed nearby. The sky seemed full of planes, B-17s and C-47 transports. During this time, Kaye’s older brother Murray visited him and advised him that the invasion of Europe appeared to be imminent.

While walking the streets of London, Kaye observed that the British capital had taken a beating from the German bombing earlier in the war.  There was more to come.  In the spring of 1944 the first German V-1 buzz bombs or rockets landed on London. Kaye recalled that while in the air the noise was like a motorcycle, a sound that abruptly ended when they hit and exploded.  The later V-2 rockets were faster, silent and more unpredictable.  Kaye was 18 years old at the time and has no recollection of any particular fear regarding his own safety.  He did feel empathy for the British however, and he frequently passed out American cigarettes (much in demand) to Londoners.

Kaye visited Paris after the city’s liberation and also visited his brother Murray, a Provost Marshal at Rheims, France. He observed several POW camps in France and stated that he saw German POWs tripping the bodies of their deceased comrades for personal effects. The French people were literally starving, and they dug through discarded American food for sustenance. 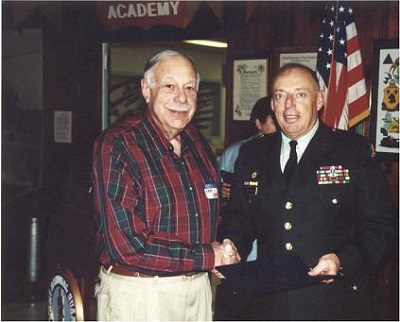 With the end of the war in Europe, Kaye’s brother Charles’ unit, the Eighty-Seventh division, returned to the United States to prepare for the invasion of Japan, but fortunately that mission was called off when the war ended in the Pacific following the atomic bombing of Hiroshima and Nagasaki.  Samuel Kaye was discharged from the army on April 1, 1946 with the rank of sergeant, and married after he returned to civilian life, working as a motion picture projectionist for awhile before entering his wife’s family business, a retail women’s wear store.  At the time of his oral history interview, the Kayes had been married for fifty-five years and enjoyed several children and grandchildren. Kaye stated that if he were to regain his youth, he would repeat his wartime experience. His advice to young people is that they should realize that retaining freedom requires a price, and that military service was and remains a good experience.

At the end of his interview, Samuel Kaye displayed several photos of the invasion of France and citations from the French government relating to the liberation of France. His citations include the American Campaign, African-Middle Eastern & European Campaign, the Good Conduct Medal and the World War II Victory Medal.