Robert Cuccurullo was born in Brooklyn, New York in June, 1964. His father was a Korean War veteran who had been drafted in 1952. The elder Cuccurullo was not sent to Korea, however, and was stationed in Germany as a military policeman. Robert told the interviewer that he was infatuated with the military from an early age, and joined the Army when he was 20 years old. He had initially thought of joining the Air Force, but picked the Army because the Army allowed him to choose his occupational specialty.

Cuccurullo’s branch choice was the Engineer Corps; and, following his enlistment in October 1984, he was sent to Fort Leonard Wood, Missouri for basic and advanced individual training, which lasted sixteen weeks. He recalled that adjusting to military life was difficult, and that his thick Brooklyn accent and long Italian last name seemed to annoy his Drill Sergeant, who he initially perceived as picking on him. He had an easier time adjusting, however, once he realized that he was being treated the same as the other recruits.

On completion of his training, Cuccurullo was assigned to Fort Campbell, Kentucky with the 101st Airborne Division. Even though he enjoyed his time with the 101st, he was homesick; and, he went home whenever he could. Cuccurullo spent his entire first enlistment with the 101st, and when he was discharged in 1987, he returned to Brooklyn and enlisted in the Army Reserves. Since there was no engineer unit near Brooklyn, he was attached to a supply company in Fort Totten, Queens, New York.

When Operation Desert Shield began in 1990, Cuccurullo was told there was a shortage of qualified combat engineers, and to expect to be activated. His unit was not called up, but he volunteered as an individual and was sent to Fort Benning, Georgia. He thought he would receive a refresher course in army engineering, but was advised that he was now a truck driver. Cuccurullo received two weeks of training before being sent to Saudi Arabia in January, 1991.

In Saudi Arabia, Cuccurullo was initially assigned to the 915th Transportation Company at “Log Base Echo,” but was then transferred to the Eighth Engineer Battalion. After a month’s service in the Eighth, he was transferred back to the 915th as a truck driver, because he had not had recent combat training. The 915th was responsible for moving ammunition, and the tractor trailer truck Cuccurullo drove carried thousands of pounds of missiles and other ordnance.

As supply trucks approached the Kuwaiti border at night, they had to turn off their lights, and drivers had to follow special small glowing lights affixed to the rear of each vehicle in the convoy. Cuccurullo said that, when drivers were suffering from sleep deprivation – a not uncommon condition – it was hard to follow the lights, and trucks would get lost, requiring someone to go back and locate them. With the advent of Operation Desert Storm, Cuccurullo was in a convoy driving into Kuwait; and, when it became light enough, he realized there were foxholes all around. He and other members of his unit investigated the foxholes, formerly occupied by Iraqi soldiers, and they found cheese packets, weapons, letters to loved ones, and pictures. It was the first time he realized the Iraqis were not that dissimilar from Americans; and, they were all going through similar stressful situations. 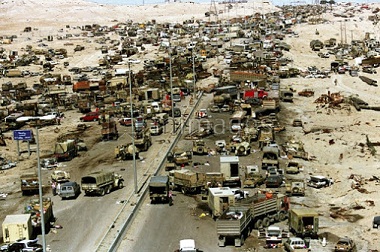 Cuccurullo recalled that the most disturbing aspect of the Gulf War was all the carnage he witnessed, at its conclusion, which he remembered vividly at the time of his interview twenty-two years later. After the Iraqi army fled Kuwait City, the 915th was tasked with going to the city to drop off supplies, and to help clean up there and beyond. He recalled that there had been civilian deaths, many of them, unfortunately, due to American bombing. While driving along the “Highway of Death,” he and his comrades saw dead Iraqi soldiers “burned to a crisp” sitting in trucks with their hands still on the steering wheels. He remembered that the worst aspect of the war for him was “cleaning up” the bodies of women and children from the streets. He feels that the military did not properly prepare him or his fellow soldiers for what they witnessed, and that they had no idea what their actual duties were to be when they were assigned to “clean up.”

When Cuccurullo and other soldiers arrived back in the United States from Desert Storm, they were quarantined for three days, to assure no one was returning with a communicable disease. He went home to Brooklyn, re-enlisted in the Regular Army in October 1992, and was sent to Wildflecken, Germany, which had been an old SS post during World War II. While in Germany, Cuccurullo tried to join the Special Forces, but was rejected when a physical exam revealed “spots on his lungs.” No one seemed to know what, if anything, the spots indicated, but they were later classified as a symptom of “Gulf War Syndrome,” and the Army retired him. After working briefly as a corrections officer and in the restaurant and food business, Cuccurullo became a middle school history teacher, and at the time of his interview was working at the Asbury Park Hope Academy.

Cuccurullo told the interviewer that he feels insulted when people call Desert Storm an “easy war.” Although he believes that the war was justified, he believes today that the only armed conflicts the United States should be involved in are defensive wars, if the country has been attacked. His advice to today’s youth is to try to listen to both sides of an argument, and “make up your own mind.” He advises them to “not blindly believe everything you are told.”

Robert Cuccurullo is profiled in a June 2019 article at prnewswire.com.