Pratik Mansukh Mavani enlisted in the United States Army Reserves at the age of 17 on May 25, 2001 in Bloomfield, New Jersey. His main motivation for enlisting was his love of his country, reinforced by an AP history class in high school. Mavani came from a very conservative Indian family, and his parents were first generation immigrants. Due to his family background, his parents’ consent was extremely important to him, in addition to being a legal necessity. In getting their permission to enlist, Mavani was ensuring that they respected his decision. Upon receiving it and enlisting, he was assigned to a Transportation Corps unit, the 961st Movement Control Team, based in Staten Island, New York.

The September 11, 2001 attacks on America occurred just a few months after 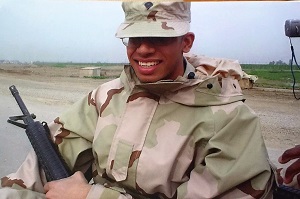 Mavani enlisted, while he was in his first semester as a student at Rutgers University, and before he had attended basic training. He had never anticipated such a massive domestic emergency. His recruiter made an offhand remark that he could be discharged without consequence if he didn’t show up to boot camp, but he never considered that an option. During his second semester at Rutgers, Mavani went to boot camp, and he completed his basic training at Fort Jackson, South Carolina, between January and March 2002.

While at one drill during basic training, Mavani noticed that he was standing directly over a nest of fire ants. He tried to bring this to the attention of his sergeant, who was disinterested in what Mavani was trying to tell him. The end result was that he ended up covered in fire ant bites. Mavani said that he held a grudge about this incident until he went to Iraq. Once in Iraq, he realized that the 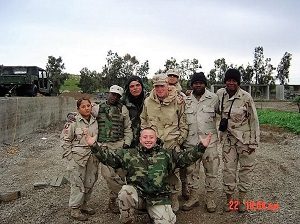 intensity of his training was what was going to keep him alive.

Mavani recalled that the basic training regimen, where he was the youngest soldier in his unit, required a big adjustment from civilian life; trainees were not allowed to leave camp until the end of the course. He made it through, though, and over the next three months, he completed his Advanced Skills Training at Fort Eustis in Virginia. Advanced Training was very different from basic training. Since Mavani’s military specialty was logistics control as a transportation manager, it involved sitting behind a computer, rather than standing on a fire ant colony! On completion of this training, he returned to his reserve unit in New Jersey.

In February of 2003, the men of Mavani’s unit, the 961st Movement Control Team of the 436th Transportation Battalion, were advised that they were being deployed, and informed that they had one week to get their affairs in order. Mavani informed Rutgers University that he was going overseas. Prior to leaving, the unit spent three months training at Fort Dix, New Jersey; and, although advised of a different assignment destination every two weeks, Mavani and his fellow soldiers thought they would end up in Kuwait. When Iraq was invaded in 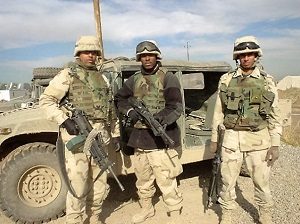 In the last week of April 2003, the 961st Movement Control Team flew from New Jersey to Germany, and then on to Kuwait, where the unit was stationed at Camp Arifjan and tasked with arranging and coordinating the movement of troops into Iraq. Mavani recalled that at the time he felt that he should have been doing more, and wanted to get in on the action.

Mavani got what he had hoped for when his unit moved into southern Iraq to Tallil Air Base, which the army shared with the air force; although, there was little interaction between the branches of service. Mavani and his unit continued to move, spending a month at Camp Cedar, Iraq managing convoys, and then further north, riding in a night convoy to the city of Mosul, where the 961st would spend the rest of its deployment. While in Mosul, the unit managed humanitarian convoys, which brought in fuel, food and other supplies.

In addition to convoy management, Mavani served with the Civil Affairs Patrol, which moved around in the streets of Mosul to determine which public works in the city needed to be repaired and maintained, as well as to demonstrate an American presence. He enjoyed the Civil Affairs Patrol and took pride in his work there, interacting with children on the street in hopes it would have some impact on the future of Iraq. Mavani gave them candy and bought them small items from the local markets. Convinced that the future of Iraq lay in the hands of its children, Mavani believed that positive interactions would demonstrate to them that the Americans cared about them and wanted to help them. The 961st included female soldiers, and women from the unit would go on patrol as well. Mavani recalled 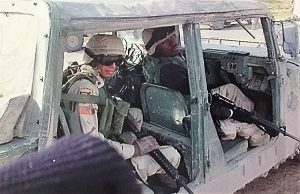 that young Iraqi girls would swarm around the women, amazed to see them in such a role.

Mavani remained a firm believer in positive interactions with the Iraqis, even after the Americans began to be shot at in September, 2003. He still went out on Civil Affairs Patrols, while others were reluctant to do so. Mavani also discussed how his unit had a great relationship with one of the local railyards. There was never any tension between the Americans and the Iraqi railroad employees, and they worked together often. He felt that the railyard workers were grateful to the Americans who were keeping them employed.

Mavani was in Mosul in July of 2003 when Saddam Hussein’s sons were killed. He said they were hiding in a house not far from where he was stationed, and that he heard explosions and witnessed much of the operation that took them down, as he was on guard duty when they were killed.

Because he was young and single, Mavani was one of the last members to go home on a two week leave. As good luck would have it, the leave was over the Christmas and New Year’s holidays, and so it worked out well for him, because he got to spend the holidays with his friends and family. Mavani tried to surprise his family regarding his trip home, but more of them found out than he would have liked. He was, however, able to surprise his parents. On his return trip back to Mosul, he found little had changed, although his quarters now had air conditioning. The 101st Airborne Division, which had been stationed in the city, rotated back to the United States shortly afterward, and Mavani’s unit had to train members of the 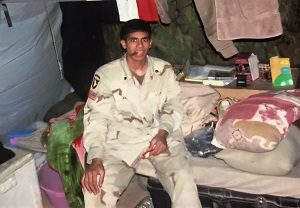 101st’s replacement unit prior to their own rotation. In March 2004, Mavani was promoted to sergeant.

In the months after Mavani’s return from leave, the gunfire directed at Americans by local insurgents steadily increased. On one occasion, a rocket fired into the convoy yard where he was working went right over his head. Mavani also discussed how there was an unspoken bond among the members of his unit. Even though they got annoyed with one another at times, they would have died for one another.

As their year-long tour of duty began to wane, the soldiers of the 961st began preparations to return to the United States. Fortunately, the unit suffered no casualties during its time in Iraq. Mavani talked about what it was like to return home, and how he and his comrades felt anxious and feared they could have been turned around at any time. The unit landed safely at McGuire Air Force Base in New Jersey, where they were surprised by their families who were on hand to welcome them home. Sergeant Mavani was awarded the Army Commendation Medal for his service in Iraq.

On his return from Iraq, Mavani resumed his undergraduate studies at Rutgers, where he became involved with the group “RU for the Troops,” an organization that made email contact with deployed soldiers and mailed them packages. He enjoyed being involved with this group, as he felt that he was still doing his part to assist his fellow soldiers.

When Mavani returned to school he was randomly assigned a dormitory roommate, John Bilby, who was an ROTC cadet. At first they did not interact, but after a while they became good friends. Bilby encouraged Mavani to participate in the National Guard Militia Museum of New Jersey’s oral history program, and accompanied him to the interview. During the course of his interview, Mavani showed the interviewer photos from his deployment in Iraq, including pictures of the convoy yard where he worked, his living quarters, soldiers from his unit and him on Civil Affairs Patrol interacting with local children.

Pratik Mavani left the army reserves at the completion of his term of service in 2008. He graduated from Rutgers, went on to medical school and is now a physician. His college roommate John Bilby was commissioned in the New Jersey National Guard and, as a captain, served a tour in Afghanistan with the 117th CSSB, earned an MA degree in history and is now enrolled in law school.