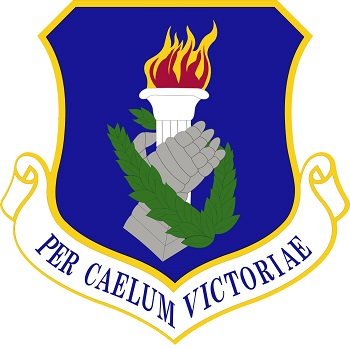 The air refueling portion of the 108th’s history is relatively new, only dating back to October 19, 1991, when the unit was re-designated as the 108th Air Refueling Wing. However, its history as a Wing began in March 1950.

The 108th Fighter Wing was activated on March 1, 1951, for the Korean War and assigned to the Strategic Air Command. It was subsequently transferred to the Tactical Air Command and released from active duty on November 30, 1952. It was reactivated on October 1, 1961 for the Berlin Crisis and immediately transferred overseas. The 108th spearheaded OPERATION STAIR STEP, the largest ran-Atlantic deployment of jet fighters in history. It developed a simple but unique procedure to maximize “topping off” each jet fighter’s- fuel tanks prior to the long, over-water flight to Europe. The technique was adopted by all units that followed. Its proudest Berlin Crisis achievement came shortly after it arrived at Chaumont Air Base, France. Of all the Guard and Reserve fighter units activated, the 108th was the first of only two units declared combat ready upon arrival by the U S Air Forces, Europe, inspectors. The wing was released from active duty on August 17, 1962.

In April 1964, when it traded its “Thunderstreak” for the F-105B “Thunderchief”, the 108th was the first Air Guard unit to fly twice the speed of sound. In 1989, it was declared the best Air National Guard flying unit and awarded the coveted Spatz Trophy. It participated in numerous exercises and made six overseas deployments as a fighter unit, to France, Greece, Ecuador and three times to Norway.

The 108th received its first KC-135E Stratotanker on September 27, 1991. Yet, a scant 69 days later, on December 6, it flew its first refueling mission. Forty one days later, on January 16, 1992, it flew its first operational mission – a night, air refueling of an E-3B “Sentry” bound for the Persian Gulf. 1992 was a busy year for the 108th. They flew their first passenger airlift mission on February 27; its first overseas mission (Costa Rica) on March 13; its first European mission, Germany, May 28, South Korea on July 20, and its first humanitarian mission on September 1, (three Stratotankers filled with critically needed supplies to “Hurricane Andrew” (Florida) victims).

The Wing was certified combat ready on December 3, 1992. The very next day it was tasked with two missions – its first operational deployment – nothing less than spearheading and establishing the U.S. – Somalia air bridge for OPERATION RESTORE HOPE. It not only deployed an air refueling detachment to Moron Air Base, Spain, but also airlifted active duty air crews to Cairo West Air Base, Egypt. In January 1993, while deployed at Moron AB, Spain, the Wing off loaded its one millionth pound of fuel.

On October 1, 1993, the 170th Air Refueling Group NJANG consolidated with the 108th Air Refueling Wing. The 170th Air Refueling Group, including the 150th Air Refueling Squadron was established at Newark Airport, NJ, on February 1, 1956 and transferred to McGuire AFB in July 1965. The 108th welcomed the 150th Air Refueling Squadron’s 37 years experience in airlift and air refueling operations, and its 130,454 accident-free flying hours, recognized as the world’s safest flying record. During the Vietnam War, the 150th, then equipped with the C-121 “Constellation,” flew many airlift missions from the U.S. to Southeast Asia. It was the first air refueling unit in the Nation to launch tankers to establish the now famous U.S. – Saudi Arabia “Air Bridge” during OPERATION DESERT SHIELD – DESERT STORM. Hours after President Bush ordered U.S. forces to the Persian Gulf, 150th aircrews were refueling fighters and cargo transports winging their way nonstop from the U.S. to the Persian Gulf. Shortly thereafter (and again prior to certain units’ personnel being activated), the 150th deployed aircraft, aircrews, maintenance and support personnel to Saudi Arabia. It also provided urgently needed medical, security police and support personnel to U.S. air bases to assist active duty personnel and serve as “back-fill” for those already rushed to the combat theater.

In September 1994, for over 30 days, five aircraft and 300 members deployed to Pisa, Italy for DENY FLIGHT. The 108th replaced the 126th ARW of the Illinois Air Guard. Supported by 15 active duty Air Force personnel, the 108th ARW was the first Air Guard Unit to take full responsibility during that period.

May through August 1995, 13 members of the 108th and 170th Clinic deployed to Guantanamo Bay Naval Base, Cuba for a humanitarian mission, Operation SEA SIGNAL.

The 108th ARW deployed during 1998 in support of Operation Northern Watch, Phoenix Scorpion I, II and III, Deliberate Guard, NATO Airborne Early Warning Force at Geilenkirchen, and Iceland in support of NATO tasking. The wing also provided support for deployments to the Persian Gulf region, and aerial refueling support to schools for refueling training.

The 108th Air Refueling Wing (ARW) completed a successful and intensive year of operations in 1998. The unit maintained an unparalleled tempo of operations, combined with a record number of accomplishments during the year while meeting all tasking requirements for both state and federal missions.

The 108th’s presence was felt worldwide during 1998. Due to the number of events that shaped the past year, the wing was called upon and participated numerous times in support of the nation’s defense structure. Among the operations in which the unit participated were: Operation Northern Watch (the ongoing enforcement of the northern Iraq no-fly zone); Phoenix Scorpion I, II, and III; support of short notice deployment of augmentation forces for the South West Asia Theater of Operations; Operation Deliberate Guard (the continued enforcement of the Bosnian no-fly zone); and ongoing support of NATO operations in Germany and Iceland.

These various missions served this country’s efforts to stabilize potentially dangerous regions throughout the Balkans and the Middle East. During these deployments, the unit refueled Air Force receivers as well as NATO aircraft. Additionally, the unit successfully off-loaded more than two million pounds of jet fuel.

Early in the year, 900 wing personnel deployed to the Combat Readiness Training Camp in Savannah, Georgia, where the unit successfully completed an Operational Readiness Exercise. This deployment was one of the largest single unit deployments in Air National Guard history.

In addition to these critical missions, and its normal training operations, the 108th also supported: US Air Force Flag operations in support of Air National Guard units requiring air refueling training during realistic combat scenario exercises. “Business Effort” missions designed to assist other Air Force training assets during the air refueling portion of their programs. 70 airlift missions in support of both Air Mobility Command and the ANG operations around the globe. Many of these missions included air refueling of strategic airlift resources worldwide.

Among the many challenges faced by the wing was the Logistics Group’s ability to meet the high maintenance demands placed on the fleet of 21 KC-135 aircraft. As in previous years, the 108th’s maintenance function exceeded ANG standards for fleet average mission capable rate. The rate was well over 83 percent, surpassing the national standard of 78 percent.

These consistently superior results reflected most favorably on the wing’s logistics function. The unit met 100 percent of its external taskings at an unprecedented level and provided sufficient aircraft to permit all aircrew to complete 100 percent of their in-flight training requirements. In addition to the high maintenance pace, the wing remained accident-free as it continued to expand its superior safety record, an achievement unparalleled in the ANG or the active Air Force.

While the wing’s emphasis during 1998 was on the extensive operational tasking tempo, several highly successful and productive non-flying deployments occurred in the United States and throughout the world. Portions of the wing’s Security Forces participated in two deployments to Korea. The 108th’s Medical Squadron deployed to England in support of US Air Force-Europe (USAFE) assets, while the Logistics Group deployed supply personnel to Europe to enhance USAFE operations in addition to receiving training.

Community involvement is an integral part of the 108th. A successful charity event in the new aircraft hanger received extensive recognition as it helped raise funds for a local hospital. The wing also sponsored several trips to the Vineland Veterans Home and participated in the state Stand-Down. In 1999, the unit looked forward to increased community involvement including a Career Day for high school, vocational school, and college students. The 1998 Career Day attracted 1,000 visitors, and this year’s event is expected to draw 3,000 potential new recruits.

The Honor Guard, the unit’s Ambassadors to the Community, participated at numerous events around the state and region. Events included parades, retirements, dedications, funerals, dignitary cordon/escort duties, and, most notably, participation in a nationally televised Veteran’s Day ceremony on Monday Night Football. This group of volunteers receives continuous recognition from internal, as well as external agencies attesting to their professionalism and dedication.

The 108th continues to rebuild and revitalize its infrastructure. Three major construction projects were initiated in early 1998 and were completed well ahead of schedule in 1999. These projects include a new Corrosion/Fuel Repairs facility, an expansion of the aircraft parking ramp, and a new Squadron Operations facility which will combine to put the Wing well on its way to consolidating its operations in one area of McGuire AFB.

The 108th ARW was called to active duty from June 7-July 1, 1999 in support of Operations Northern Watch and Allied Force, deploying in the process two aircraft and 70 personnel to Incirlick AB Turkey.

The KC-135E sorties at McGuire AFB are flown by aircrews of the 108th ARW. Annually, KC-135E aircrews fly approximately 2,236 sorties or 6.211 sorties per average busy day on a five days per week basis. Approximately 0.722 sorties are flown as a pilot proficiency sortie that conducts multiple instrument approaches at McGuire AFB. About four tower-controlled patterns and five radar-controlled patterns are flown on each pilot proficiency sortie. The remaining 5,489 daily sorties depart the McGuire AFB area for operational (0.433 sorties), air refueling training (4.333 sorties), or navigation training missions (0.722 sorties). Multiple instrument approaches, takeoffs, and landings for pilot proficiency are accomplished on return to McGuire AFB on about 90 percent of the air refueling missions. Approximately 50 percent of the air refueling and navigation training missions return to the base after 10:00 p.m. No KC-135E departures are accomplished between 10 p.m. and 7:00 a.m.