The 104th Engineer Regiment was called into Federal service on 20 June 1917, as a separate Engineer Battalion. On 15 September 1917, the battalion joined the 29th Infantry Division. The consolidation referred to above, took place while in Federal service to form the Regiment of Engineers in the old Square Division of World War I.

On 14 June 1918, the regiment moved to France as part of the Army Expeditionary Force’s 29th Infantry Division. Arriving at Brest, the regiment saw service with the 29th Infantry Division at Moatz, Grandchamps, Coublanc, and Lafford. During the eleven months of AEF service, the battalions of the regiment operated in an attached status with the French Army’s V Corps. General engineer support as well as combat engineer operations were provided to both the French Army and the United States First Army. On 11 May 1919, the regiment was sent home to Camp Dix, New Jersey, where it was mustered out of Federal service.

With the reorganization of the National Guard after World War I, the unit was designated as the 1st Battalion Engineers, New Jersey National Guard, on 11 July 1921. The battalion’s headquarters was located at Englewood, New Jersey. During April of 1922, the battalion was again expanded and redesignated the 104th Engineer Regiment. 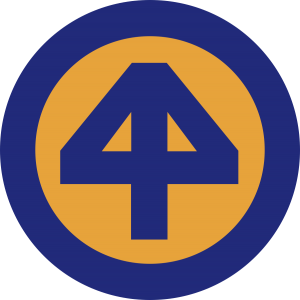 The regiment, less the 2nd Battalion, was preparing to leave for the Carolina Maneuvers. Having just returned from maneuvers at A.P. Hill, Virginia, another reorganization took place. The 1st battalion was designated as the 104th Engineer Battalion, left the 44th Infantry Division, and was stationed at Camp Claiborne, Louisiana. From Camp Claiborne, the 2nd Battalion was designated the 177th Engineer Regiment (General Service), and was sent to the First U.S. Army area.

The new 104th Engineer Battalion moved to Fort Lewis, Washington. During their stay at Fort Lewis, the battalion was designated the 104th Combat Engineer Battalion and was given temporary duty status, and was attached to the Amphibian Training Force, Presidio, California. As a corps engineer battalion, they continued to train and moved to Fort Ord, California. The battalion joined the 7th Infantry Division by attachment on 5 May 1943. As part of the Amphibian Assault Force, the battalion sailed on the USS Josiah D. Whitney and LST 483 and LST 478. The 104th Engineers made the landings at the Aleutian Islands as part of the First Army’s forces to engage the enemy in July 1943. After the fighting, the battalion was under the control of the Alaskan Defense Command and performed construction missions.

While the old 2nd Battalion (now the 1st Battalion, 175th Engineer Regiment) was supporting combat operations in North Africa, the 104th Combat Engineer Battalion left the cold of Alaska for the sun of Oahu, Hawaii, in July 1943. Construction of housing and training areas for an Infantry Regimental Combat Team was completed at Koko Head, Hawaii.

In January 1944, the battalion made combat landings and provided engineer support in the Mandated Island Campaign of the Marshall Islands. After the invasion and assault, the battalion supported elements of the 4th Marine Division and contructed airfields on the islands for the U.S. Army Air Corps. The battalion then returned to Oahu, Hawaii.

While the 104th Engineer Combat Battalion was actively supporting the operations of the XXIV Corps in the Pacific, the 1st Battalion, 175th Engineers was making landings in Sicily and Italy during 1944 and 1945. They supported the Fifth U.S. Army’s fight up the Italian boot – Sicily, through Naples, Rome and the Po Valley.

In February 1945, the battalion was assigned to the Tenth U.S. Army and came under operational control of the XXIV Corps. The battalion would once again join their former friend, the 7th Infantry Division, for the invasion and assault on Easter Sunday morning, 1 April 1945, on the island of Okinawa.

The battalion stayed on Okinawa until the end of the war in the Pacific. Movement to, and occupation of Korea was next in line for units of the 104th Engineers. After a short period of duty in Korea, the battalion moved to the Philippines for movement to the United States. The battalion left Manila on 23 November 1945, on the USS Sea Barb. The battalion was inactivated at Camp Stoneman, California, on 8 December 1945.

At the same time the 104th Engineers were preparing to return home, the 1st Battalion, 175th Engineer Regiment (GS), had returned to the United States and was inactivated at Camp Patrick Henry, Virginia.

The battalion participated in its first post-war field training, 3 August through 9 August 1947, at Fort Dix, New Jersey. In December 1947, Company B was formed with two officers and nineteen enlisted. Also in December, the 104th Engineer Medical Company was authorized, with one officer and four enlisted, and the battalion joined the 50th Armored Division as the 104th Armored Engineer Battalion. The HQ Company of the 50th Armored Engineers became the battalion’s Company C. The 1407th Treadway and the 184th Pontoon Company were part of the 104th Engineer Group. The battalion and the group attended summer field training at Pine Camp, New York, for the next two years. The 104th Group was disbanded and its HQ Company became Company D of the 104th Engineer Battalion on 1 May 1949.

With the outbreak of the Korean War, the 150th Engineer Pontoon Bridge Company was ordered into Federal service, once again, on 19 August 1950, and departed for Fort Campbell, Kentucky. The company trained at Fort Campbell, and many of its personnel went to Korea as replacements. The unit returned to New Jersey in 1953.

During the Korean War, the battalion was again reorganized on 1 March 1951, to include personnel of the old 1407th Steel Treadway Company. The battalion now was organized as an HQ and HQ & Services Company, Companies A, B, C, D and the Bridge Company. From this point on, the battalion remained the same through several division reorganizations which changed its strength at times.

In October 1963, the battalion was one of the first New Jersey National Guard units, and one of the first in the United States, to go into what is now known as the Multi Unit Training Assembly (MUTA-4) weekend drill. The battalion trained during these MUTA-4 weekends at the New Jersey Military Academy, West Point, and Fort Dix, in direct support of active Army activities. 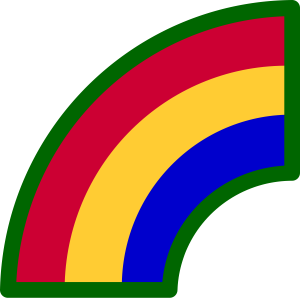 The battalion provided engineer mobility, counter-mobility and surviveability support to elements of the 50th Armored Division, with its line companies providing direct support to the division’s maneuver brigades. The battalion also participated in many community projects, such as land clearing, bridge building, and the construction of ball fields. Members of the battalion were called to State Active Duty during severe weather emergencies, such as snow storms and floods, and cleared roads and evacuated people from flooded areas with their motorized rubber boats.

The 104th Engineer Battalion was again reorganized on 1 September 1993 under the new Engineer Restructure Initiative (ERI) and was assigned to the 42nd Infantry Division. Under ERI the battalion lost its D Company and bridge company and retained its HQ and HQ Company, and Companies A, B, and C. The battalion was again reorganized on 30 September 1994, and was officially deactivated during a ceremony at the Teaneck armory on 6 November 1994. 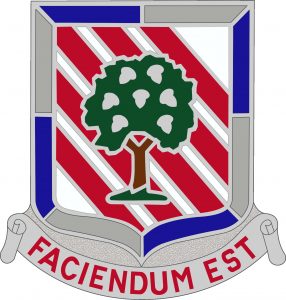 The border of BLUE and GREY indicates that the original 104th Engineers were first organized as part of the 29th Division during World War I, this division being known as the “BLUE and GREY.”

The Oak Tree shown is what is known in Heraldry as “An Oak Tree, Fructed” or an Oak Tree bearing fruit or acorns. This fruited Oak Tree is the principal feature of the shields of the Provinces in France in which the unit served during World War I. The unit served in France eleven months. Five months of front-line service is indicated by the five diagonal red stripes or bondlets, the six months served after the Armistice are indicated by the six white bondlets.

The motto attached means in plain English “IT MUST BE DONE”, indicating that engineers never shirk a job, no matter how hard or seemingly impossible it is.