Michael McQueeney was born in Neptune, New Jersey in 1982. An Ocean Township New Jersey resident, he served in Operation Iraqi Freedom with men from the New Jersey National Guard’s Third Battalion, 112th Field Artillery. He deployed to Iraq with Bravo battery of the 112th, which was assigned to Military Police duty and attached to the 759th MP battalion, a component of the 89th Military Police Brigade.

Motivated by the events of September 11, 2001, McQueeney joined the New Jersey National Guard as an enlisted man in February 2002. His family before him had a rich military tradition. McQueeney’s paternal grandfather was an infantryman in World War II; his maternal grandfather was a Korean War veteran; and, his father and his stepfather had both served in Vietnam. He told the interviewer that none of his family members had ever shared their wartime experiences with him, however. He did recall that his family had watched the Gulf War on television.

Prior to his enlistment, McQueeney had completed his freshman year as a criminal justice major at Rutgers, and was a member of the ROTC program. A friend convinced him to join the New Jersey National Guard so they could serve together. McQueeney went to basic training and advanced individual training at Fort Leonard Wood, Missouri during the summer following his freshman year. He was ordered to active duty, along with fourteen other soldiers from his unit, the 112th’s service battery based in Toms River, during the spring semester of his junior year, when he was twenty-one years old. While in a training period at Fort Dix, during which the artillerymen were trained to work as military policemen, it became evident that he and his fellow soldiers were going overseas.

On February 22, 2004, McQueeney boarded a C-130 plane bound for Kuwait. On landing, his first impression was amazement at the stifling heat, and he summed up the country to the interviewer as “hot, and all desert.” The experience was particularly shocking, because it had been quite cold with a considerable amount of snow on the ground at Fort Dix when he left. His company was assigned to tent quarters for ten days of acclimatization, and they then flew out of Kuwait airport to Baghdad International Airport, landing there in total darkness at 3:00 AM on March 4, 2004. On arrival in Baghdad, McQueeney noted that only military aircraft were allowed to land or take off at the airport.

Baghdad was not what McQueeney expected. The city had paved roads lined with palm trees, and the weather was more temperate than in Kuwait. He and his fellow soldiers were assigned to nice barracks, with access to a good chow hall. He had not anticipated that duty in Iraq would be as good as it initially seemed. The men of his unit were given time to adjust to their new surroundings, and learn their duties from the unit they were replacing, riding along with the veterans on their daily patrols as part of “on-the-job” training.

McQueeney noted that there was not a lot of fighting going on in Baghdad when the National Guardsmen arrived. He also remarked that no training in the United States can fully prepare a soldier to fight overseas. Once settled in, the New Jersey soldiers were introduced by the outgoing unit to the local Iraqi police. Many of the police officers seemed happy to have the Americans assist them in working on local security. Once he got to know some of the police officers, he was surprised by their backgrounds, discovering that many of them became policemen because there were no other job options open to them.

On April 4, 2004, McQueeney and his fellow soldiers were standing outside in a formation when someone started shouting to get in the trucks and prepare for action. That night Baghdad erupted into violence, as the Shia “Mahdi Army” militia in Baghdad’s “Sadr City” neighborhood rose up to attack the Americans and the Iraqi police. Police stations were heavily targeted by the insurgents, and the Jersey Guardsmen were assigned to help secure those posts. McQueeney remembered that this was the first time he heard a rocket-propelled grenade (RPG) go off, and that the noise was deafening.

McQueeney said that he and his fellow soldiers not only worked on security problems, but were also attempting to make life in Iraq better. They could not, as he put it, bring the war-torn country “up to the American standard of living,” but could improve things to make life bearable. He was proud of his role in cleaning up the city. When he first arrived, the streets were covered in trash, but by the time he and his fellow soldiers left for home, things were cleaned up, and there were power plants and sewer systems under construction. 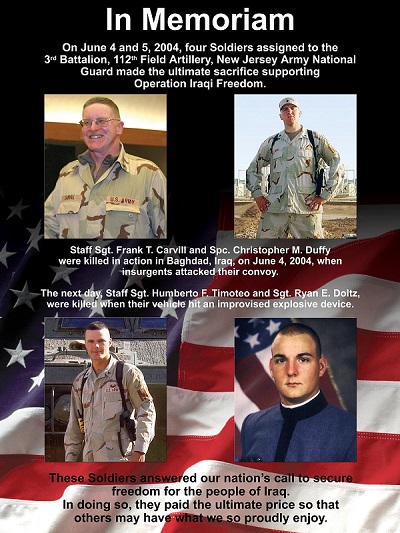 Children often followed the Americans as they went on patrol, and the soldiers would sometimes give them candy, Girl Scout cookies, soap, and other items that they had received in packages from home, and have conversations with the children, who invariably spoke English, although in general they tried to discourage the children from distracting them from their jobs.

There was, indeed a tragic downside to McQueeney’s deployment, as his unit suffered casualties during its Iraqi tour. Sergeant Frank Carvill, a 51-year-old from Carlstadt, New Jersey, who worked as a paralegal for the Port Authority of New York and New Jersey, and Specialist Christopher Duffy, a 26-year-old basketball coach and new father from Brick Township, New Jersey were killed by an rocket-propelled grenade that hit the Humvee they were riding in as convoy escort down a trash-lined highway in Baghdad on June 4, 2004. The attack was quickly followed by an IED explosion. Sergeant Humberto Timoteo, a 25-year-old Newark, New Jersey resident and native of Portugal, and 26-year-old Specialist Ryan Doltz of Mine Hill, New Jersey lost their lives to another IED the following day. McQueeney discussed Sergeant Carvill, who he knew well, describing him as a “father figure” in the unit, and remarked that the 24 hour period was the “deadliest day for New Jersey” during the Iraq war.