Joseph Kenny was born in June 1947 into a family with a rich military history. With relatives who had served in the First and Second World Wars and Korea, Kenny was imbued with the concept of service to one’s country. After graduating from high school, he joined the Army with hopes of becoming a helicopter pilot.  He was rejected for pilot training due to color blindness, however.  After enlisting in Newark New Jersey, Kenny was shipped to Fort Bragg  North Carolina for basic training, and then to Fort Gordon Georgia, where he received advanced individual training (AIT) at the army’s Military Police school. Kenny received training on a number of weapons, including the M-16 rifle, .45 caliber automatic pistol, M-60 machine gun, M-79 Grenade Launcher, and M-67 Recoilless Rifle. During his training, Vietnam was “on his lips 24/7.” 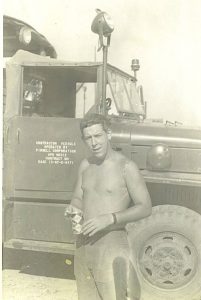 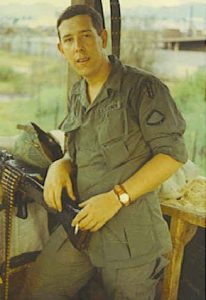 Kenny’s first assignment was with the 4th Armored Division , located in southern West Germany. His daily duties included standard police patrol of the division’s base and surrounding areas.  During this service, a potential Cold War flashpoint, Kenny and his comrades often observed Soviet troops across the border in East Germany and were fully aware of the possibility of war with the Red Army. Despite that Cold War tension, Kenny found M.P. duty in Germany to be rather mundane.

Following the North Vietnamese Army (NVA) and Viet Cong (V.C.) Tet Offensive in January 1968, Kenny was reassigned to duty in Vietnam.   He arrived in Phu Tai in June 1968 and quickly became aware of the shocking level of violence in the country.  As an M.P., he provided security for fire bases and supply convoys.  While on guard duty, Kenny’s position came under mortar attack, and he vividly recalled the traumatizing sound of the enemy rounds hurtling through the air toward him. 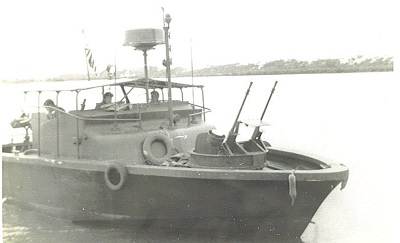 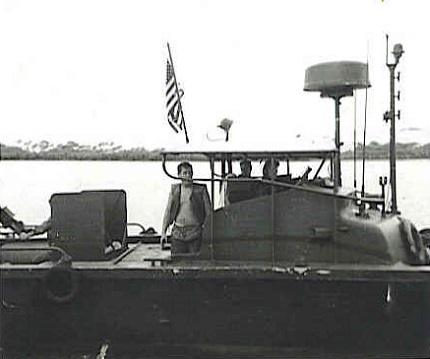 Kenny volunteered for duty with the 458th Transportation Company’s “Patrol Boat River” (PBRs) which needed M.P.s to serve as the crews on its boats. While patrolling  rivers and swamps, Kenny served as a .50 caliber machine gunner and rifleman. Unlike the Navy’s patrol boats, the Army’s PBRs would travel through shallow water, often disembarking to assault enemy position just yards from the riverbank. A small reconnaissance aircraft would patrol the target area, looking for signs of enemy activity and concealed positions. Once a threat was spotted, Kenny’s patrol boat would arrive, attacking the unsuspecting enemy through the thick riverbank vegetation. Once contact was established, Kenny and another crew man would disembark and assault the position, often engaging in combat with NVA and V.C. troops at close range.

One incident found Kenny’s boat stalled near the bank, requiring a standard repair on the spot. Kenny and another crew man disembarked to establish a security perimeter around the boat for the duration, but after taking only a few steps inland, he noticed a fresh footprint in the mud. Sensing imminent danger, he signaled his comrades to return to the boat, where they quickly manned the .50 caliber machine guns in preparation for an attack that fortunately did not occur.  Now back in service, the boat quickly left the scene.

The following day, reconnaissance from the Forward Air Controller (FAC) pilot indicated there was an enemy bunker occupied by more than a dozen enemy soldiers just yards from where Joseph and his friend had been standing the day before. Kenny’s PBR craft returned to the scene, assaulted the position, and inflicted significant casualties on the enemy soldiers who could have killed him and his crew the previous day. Kenny described combat in Vietnam as chaos. Attacks could come at anytime and anyplace, creating an air of tension that has remained with him to this day.

When they were not hunting for NVA and Viet Cong troops, the PBR crew would search Vietnamese vessels for weapons and other contraband.  Kenny would often trade with the Vietnamese civilians for different goods, including various types of indigenous seafood. Upon arriving in Vietnam, Kenny felt like he had traveled to another time. The wildlife in the Vietnamese marshes could be just as dangerous as the enemy. Joseph observed many dangerous animals in their element including tigers, various types of venomous snakes, and monitor lizards. River rats too were always a significant threat to the health and safety of the crew.

Seeing heavy combat, Joseph Kenny is very familiar with the unique and traumatic violence of the Vietnam War. In the heat of an assault on a company sized encampment, Kenny accidentally shot a surrendering NVA soldier. Despite the protest of some of his crew members, he retrieved the badly wounded enemy soldier, and in doing so, saved his life. As a soldier, Kenny understood the NVA and VC would not have afforded him the same courtesy. During another raid, Kenny heard a distinct pop sound as the enemy retreated from their position. Inside, Kenny found the body of a blindfolded American soldier, executed by gunshot. Kenny was wounded when an errant grenade exploded in his vessel. Despite his wounds, Kenny did not receive a Purple Heart, since the type shrapnel extracted from him was deemed ‘friendly’ in origin.

Joseph Kenny returned home from Vietnam to a supportive family, but he experienced the public rejection felt by most returning veterans. He has kept up with his comrades and regularly attends reunions of the 458th “Sea Tigers.” His experience on the rivers and swamps of Vietnam stand as an important record of this unique aspect of the conflict.