John “Jack” Harden was born in Camden, New Jersey, in March 1924. After graduating from high school, he was hired as a clerk at an insurance company in New York City. Like many Americans of the era, Harden did not pay much attention to the wars going on overseas; and, he recalled that there was little discussion about those conflicts among people who he knew and worked with. Harden was home when the Japanese attack on Pearl Harbor occurred on Sunday, December 7. 1941. He returned to work the following day, and war had suddenly come to the forefront of everyone’s thoughts and conversation.

Harden decided then that he wanted to join the Army Air Corps, because he thought that branch of service would be glamourous, as well as challenging and interesting. He failed his initial physical test, because he was underweight, but passed a subsequent one and joined the service on May 28, 1942. Harden attended basic training at Fort Dix, NJ and then initial Air Corps training at Sheppard Field in Texas.

Harden was transferred to Santa Ana, California for pre-flight training, which lasted six weeks. He recalled feeling very nervous, as he had never driven a car before, much less flown a plane. On his solo test flight at Santa Marta, California, Harden barely cleared the fence around the field, but he flew and landed smoothly. On completion of the training, he was awarded his wings and selected to be a bombardier, tasked with maintaining and securing bombs and accurate bombing of targets.

Harden thought he was being over trained when he was transferred to a Radar School at Boca Raton, Florida, even though the skill was unnecessary for his job specialty. After completing Radar School, he was sent to Lincoln, Nebraska, where his bomber crew was finally assembled. The crew consisted of a pilot, co-pilot, radar operator, flight engineer, five gunners, and the bombardier. The crew picked up their assigned aircraft, a B-29 bomber, in Wichita, Kansas, and in March 1945 flew overseas on a three day “island-hopping” trip to Guam, necessary due to refueling needs. Harden enjoyed his time in Guam, due to what he remembered as comfortable living conditions, especially since other Pacific Islands, including Iwo Jima, featured rough terrain and the threat posed by fanatical Japanese soldiers still holding out in caves.

Harden’s unit was the 61st Squadron, 39th Bomb Group, 314th Bomb Wing of the 20th Air Force. His first mission over Japan as a bombardier lasted 18 hours and 30 minutes and was one of the longest missions in US military history. The objective was a series of oil refineries located far north of Tokyo. Harden and the flight engineer were not allowed to sleep during the flight, making it even more tedious and exhausting. On the bright side, however, the mission took place during the last stages of the war; and, there was little Japanese anti-aircraft fire or attacks from fighter planes. Harden’s plane primarily performed low altitude missions despite the fact that the B-29 was designed for high altitude bombing. The lower altitude attacks were more effective and were possible because of the greatly diminished risk of being shot down.

Harden considers himself to have been very lucky, although even as a successful bombardier he still had a few anxious moments. On one mission over Japan, his plane was forced to fly through a dark cloud of smoke. On another occasion, the B-29’s bomb bay doors did not open automatically, and he had to crawl down to the doors and manually operate them. Despite these occasional scares, Harden and his crewmates were all certain that they would return home unscathed following completion of their allotted thirty-one missions; and, that proved to be the case. His crew’s only stop on each mission was on Iwo Jima for refueling.

Harden’s plane’s final mission in the war was to fly over Tokyo Bay as the Japanese surrender was being signed aboard the USS Missouri, to deter the possibility of last ditch Japanese pilots who might want to launch suicide attacks on the ceremonies. Following the surrender, Harden boarded a plane in Japan and flew back to the United States, arriving in Sacramento in early October. He returned to New Jersey following his discharge as a first lieutenant on December 8, 1945.

John C. Harden was awarded the Distinguished Flying Cross and the Air Medal with three Oak Leaf Clusters. He believed that his wartime experience helped him grow as a man. Harden recalled that he developed leadership capabilities during his time as a bombardier. He concluded by saying that World War II was a unique situation that cannot be replicated again, and because of that, his experience did not necessarily apply in analyzing contemporary events. 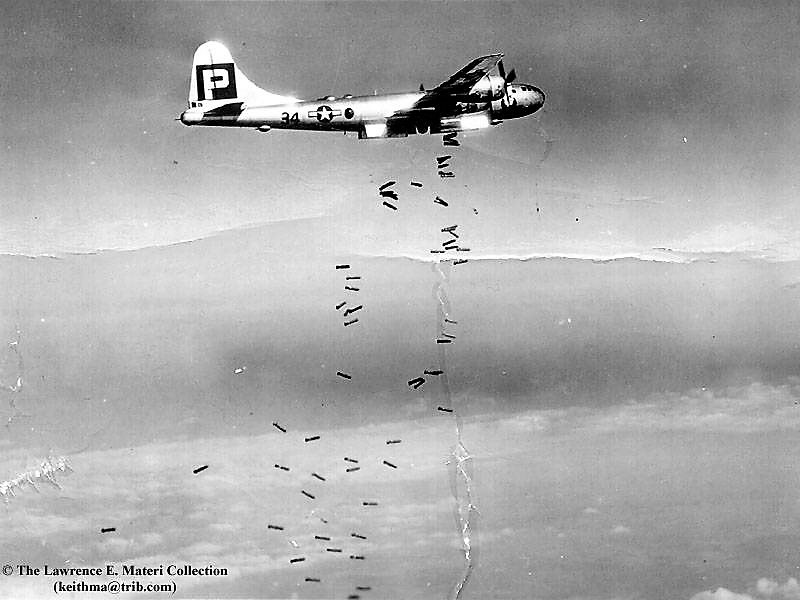