In 1980, a small but dedicated group of New Jersey National Guard officers set out to create a museum to preserve and explain the history of the Garden State’s citizen soldiers. Colonels John G. Johnson, George E. Marshall, Harold W. Nutt, James A Broderick, and Chief Warrant Officer Edward M. Geiger worked to identify a suitable location, initiate the collection of artifacts, and construct exhibits that explained, “The role of the militia in the history of New Jersey”. Chief of Staff of the New Jersey Department of Defense Major General Wilfred Menard agreed, recognizing, “that a museum is an integral part of the military.”

August 1, 1980, the state of New Jersey officially established the museum, placing it under the direction of the New Jersey Military Academy, also located on the National Guard Training Center in Sea Girt. Working on weekends and time-off, personnel assigned to the museum and volunteers worked hard to turn around disused buildings. The museum opened its doors in August of 1981, moving to various facilities before establishing itself in buildings 66, 67, and 68 by 1987. The museum made strides to be recognized by the Center of Military History, a result of the hard work of these groundbreakers and paving the way towards more support for future activities. When the NJMA was reflagged as the 254th in 1993, the museum became a more independent entity under NJ Department of Military and Veterans Affairs. 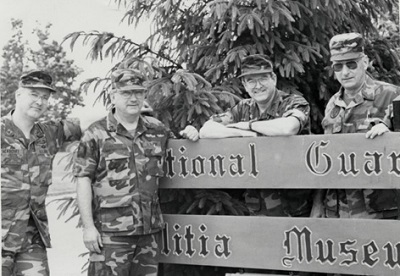 The 1990s saw the museum’s two biggest additions. The first, still the most popular and unique artifact on hand, is the Civil War era submarine The Intelligent Whale. The only surviving submarine made by the Union came back to New Jersey from the Washington D.C. Naval Yard Annex in 1999. The second major addition to the museum occurred in June the year before, with the establishment of the museum’s Artillery Annex in Lawrenceville.

Disaster struck in October 2012 when Superstorm Sandy devastated the museum, as well as much of the New Jersey coast. Dozens of individuals, including guardsmen, temporary employees, and volunteers worked around the clock over the next 6 months to put the museum back on its feet. In April of 2013, the museum at Sea Girt celebrated its reopening, though there was much work to be done.

In 2021, both the main museum in Sea Girt and the Lawrenceville Annex will welcome the public to new buildings on their respective sites. Sea Girt will utilize a repurposed building at the front of the National Guard Training Center that will be more accessible to the public, and perhaps more importantly, further from the water. The Lawrenceville Annex will be housed in a brand new building that will provide over 5,000 sq/ft of display space to better complement the impressive collection of armored vehicles and artillery surrounding the complex.

During its four decade long tenure, the museum has made steady progress in expanding its mission of preserving and presenting the story of the state’s vibrant military history to New Jersey’s citizens, through historically accurate interpretive exhibits as well as serving an educational role as an accurate source on history to more than a generation of students and researchers and expects to continue this role far into the future. One significant part of that has been the introduction of the Veterans Oral History Program in 2002. The program, which is affiliated with the Library of Congress, features over 600 filmed interviews with veterans of conflicts from World War II to the present.

September 1, 1781
Members of an elite light infantry detachment selected from the New Jersey Brigade crossed the Delaware River on their way south to participate in the Yorktown Campaign.

August 17, 1917
Construction began on Camp Merritt, a Bergen County transit installation for soldiers on their way to France in World War I. More than one and a half million men moved through the camp, where they spent ten days prior to leaving for Hoboken to board ships for Europe.