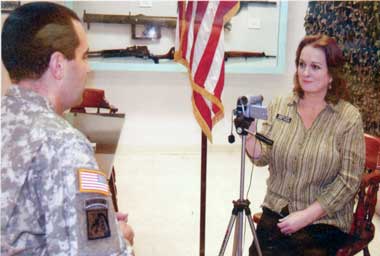 Sergeant First Class Dean Baratta was born in Trenton New Jersey, in September 1968. When he joined the army on October 15, 1986, Baratta selected the Intelligence branch, a choice that reflected his high school love of historical research and military affairs. His decision to enlist was also influenced by family tradition. Baratta’s stepfather had spent four years in the Air Force as a Morse code interceptor; his father had served as a National Guard artilleryman, and his grandfather and grandmother were in the military during World War II.

After enlisting, Baratta was sent to Fort Dix for eight weeks of basic training before moving on to Fort Huachuca, Arizona for fourteen weeks of advanced individual training as an intelligence analyst. At Huachuca, he and his classmates were advised that their work was very important and would have a direct impact on the lives of other soldiers. Baratta recalled that adapting to military life was a big adjustment for him, but that he enjoyed the challenges.

Baratta’s initial enlistment was during President Ronald Reagan’s administration, when the Cold War was ongoing, although the higher levels of that struggle had minimal impact on his day-to-day work. He did take note of macro-events, though. The Iran-Contra scandal broke while Baratta was in basic training, and his drill sergeant gave his platoon a “speech about the US selling weapons to Iran, and how everyone has to stick together,” although what the sergeant was trying to convey seemed unclear.

Following training, Baratta was stationed in Metz, Germany as a junior intelligence analyst for an infantry brigade. At that time the biggest potential threat facing the American army in Western Europe was the Soviet army in Eastern Europe. The American mission was to deter the Soviets from occupying West Berlin and invading Western Europe. In training exercises, Baratta’s unit moved to the East German border, practicing to block a Soviet invasion. It was his job to analyze potential Soviet tactics should an invasion actually occur. Baratta noted that the Berlin wall came down six months after he left Germany, and the Soviet empire began to unravel, leading to an end to the Cold War.

There were other potential hazards beyond the Soviets. While he was stationed in Germany, Baratta and his fellow soldiers were advised to use United States passports rather than military ID cards for identification should they travel to another country on leave, because the cards would single them out as targets if terrorists hijacked the plane they were traveling on.

When he joined the army, Baratta had intended to leave the service for good on completion of his initial enlistment in 1990. He returned to New Jersey and went on to receive a BA degree in Political Science from Rutgers University, but he eventually discovered that he actually missed being in the military. In January 1995 Baratta joined the Pennsylvania National Guard’s 213th Area Support Group in Allentown, Pennsylvania. While serving in the Pennsylvania Guard, he worked with the Counter-Drug program, where Guardsmen with special skills were partnered with local law enforcement agencies to increase their capabilities.

Baratta was in Allentown, working with the Pennsylvania Attorney General’s office, at the time of the 9/11 attacks. He initially heard the news on the radio and remembered that the office staff spent the rest of the day watching the news coverage on television. In the immediate aftermath of 9/11, Guardsmen were ordered to provide extra security at airports. Baratta then worked in airport security for six months. During those six months, he recalled that people came up to him on a daily basis to thank him for his service. The National Guard mission at the airport was primarily to make passengers feel more secure, while the police were there to handle any serious problems. Following airport duty, Baratta was assigned to Carlisle Barracks for three months to help start an operations center designed to collate and coordinate military and police intelligence gathering.

Baratta’s unit was notified in late February 2003 that it was going to be called to active duty and sent overseas. Most of the men in the unit, which was ordered to Fort Dix for mobilization training, expected they would be involved in the invasion of Iraq, which seemed imminent. The invasion occurred two months after the 213th reported for active duty, but the unit remained at Fort Dix for several more months. After which many of the men thought the 213th was to be demobilized, but instead it was assigned to Afghanistan, apparently on the request of the commanding officer. 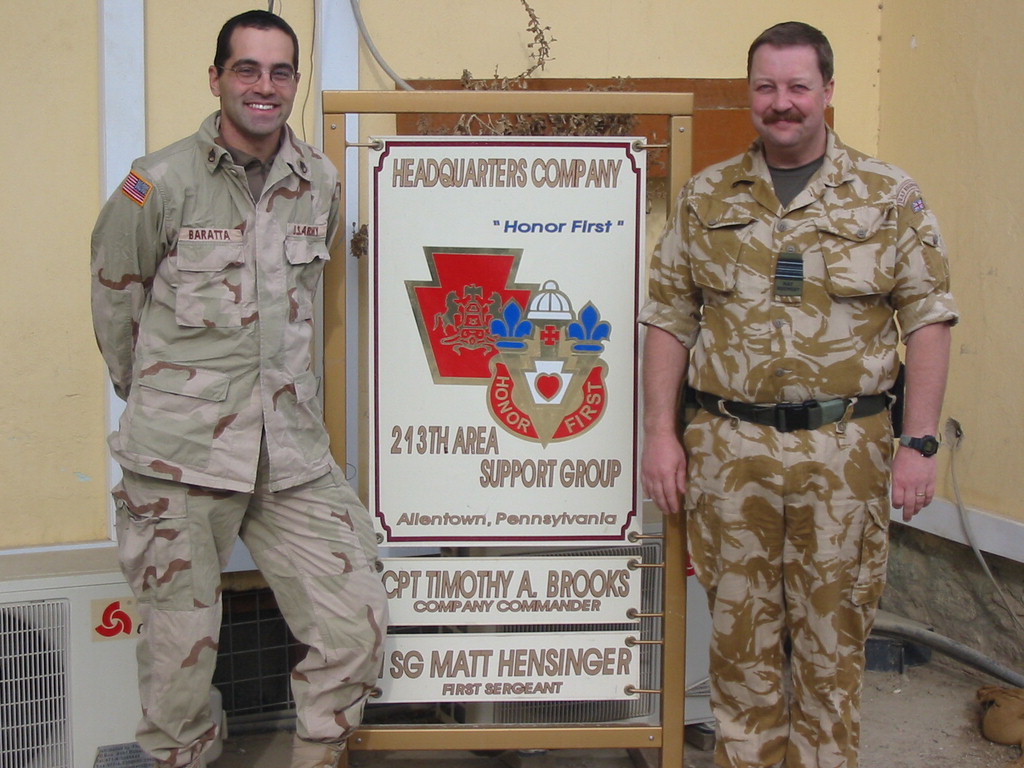 Baratta with a foreign service member, next to
a sign for Headquarters Company,
213th Area Support Group, Afghanistan

The 213th, as part of “Task Force Dragon,” was charged with running several bases in Afghanistan, in what many thought would simply be a peacekeeping mission, as combat had declined and there were few combat operations and casualties. Baratta, now a sergeant first class and senior noncommissioned intelligence officer for Task Force Dragon, was stationed near Bagram Air Base, north of Kabul. The ousted Taliban regime was not popular among the local residents, and there was lots of goodwill toward American soldiers on the part of the Afghans he encountered.

The biggest threats to soldiers on duty in Afghanistan at the time were unexploded landmines. After thirty or more years at war, Afghanistan was carpeted with unexploded munitions. American troops were told to stick to the main roads, but some soldiers were lulled into a false sense of security and became careless. Even within the confines of the base, it was not safe to stray off the main roads, as old landmines were everywhere.

Sergeant First Class Dean Baratta had moral issues about the war in Iraq, so he was glad his unit was sent to Afghanistan, where he hoped to make a difference — but when he left Afghanistan he could not see that anything significant had been achieved. He recalled that his adjustment back to civilian life was difficult; he would often wake up in the middle of the night searching for his gun. When he returned home, he got a job with the New Jersey State Police as an intelligence analyst, and transferred his military duty to the New Jersey National Guard.