David Fiedler was born and raised in New York City, graduating from Brooklyn Technical High School in 1962 with a concentration in “Technical Engineering.” Fiedler considered enlisting in the Army after high school, but instead went to Queens Community College, where he studied Electrical Engineering. After two years at Queens, he transferred to Pennsylvania Military College, where he was a member of the ROTC program. Fiedler graduated in 1968 and was commissioned as a second lieutenant in the Signal Corps.

Fiedler was ordered to Vietnam in September, 1969, where he was assigned to B Company of the 160th Signal Brigade’s 44th Signal Battalion. The 160th was responsible for running the military communications network for a large part of South Vietnam, with its component units assigned to various bases. Fiedler’s unit was headquartered at Long Binh, the massive American supply base near Saigon, where he was in charge of the Military Affiliate Radio Systems (MARS), which allowed soldiers to call home and talk to their families. Fiedler himself relied on letters to communicate, and said that he thought the shock of hearing his voice on the telephone would have caused his mother to have a heart attack. In addition to MARS work, Fiedler’s unit was tasked with maintaining communications systems for high ranking generals who needed a secure and reliable line to communicate with the Pentagon. 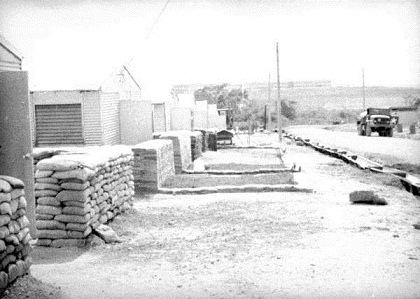 On April 29, 1970, American forces advanced into Cambodia, where the Viet Cong maintained its command headquarters and logistics base. Fielder was initially assigned to accompany the 11th Armored Cavalry Regiment in the operation, carrying Radio Teletype sets to enable General Creighton Abrams, commander of all US forces in Vietnam, to communicate with his subordinates, who were leading the incursion. At the last minute, however, Fiedler’s orders were countermanded, and he remained at Long Binh.

Fiedler recalled that the worst part of serving in Vietnam for him was leading patrols in perimeter defense operations, which would make him nervous. The 160th was a base station communications unit and, with no infantry protection, had to provide its own. There were occasional rocket attacks on Long Binh during Fiedler’s service there, but no ground attacks.

On his return from Vietnam to Fort Monmouth as a captain after a year’s tour of duty, Fiedler seriously considered making the military his career. He served as a company commander at Fort Monmouth, and was then advised that, if he wanted to stay in the service, he would be transferred to Fort Huachuca, Arizona. Fiedler advised his superiors that he would rather go back to Vietnam than to Arizona, and, having completed his obligation, exercised his option of leaving the army. He continued to work at Fort Monmouth as a civilian for more than thirty years.

After leaving active duty, Fiedler joined the reserves, and then transferred to the New Jersey National Guard. He was initially assigned to the 250th Signal Battalion, but his commander thought he would be unhappy working with that unit’s outdated equipment, and transferred him to the First Battalion, 113th Infantry in Jersey City as a Communications and Electronics Officer.

After his promotion to major, Fiedler was assigned to the East Orange Armory as an Electronic Warfare Officer for several years. On promotion to lieutenant colonel, he was appointed as Assistant Division Signal Officer, and then Chief Signal Officer in the New Jersey National Guard’s 50th Armored Division. In these positions his duty station was in Lawrenceville, where he worked with the state Readiness Command (STARC) on connecting all the National Guard facilities bases in New Jersey by radio. His last day in the National Guard was December 31, 1994, when he retired as the organization was downsized.

In the wake of 9/11, from October 2001 until February 2002, Fiedler worked with the New Jersey Naval Militia to modernize its communications systems. During this time, he was still working at Fort Monmouth as a Systems Engineer and Project Manager. After retiring in 2005, he worked as a consultant for Defense Contractors at Fort Monmouth. He also wrote a book on Electronic Engineering, taught a few classes, and has lectured at West Point and Monmouth University.

Fiedler told the interviewer if he could go back and re-do his military experience, he would join the Coast Guard. He worked with the Coast Guard in the New York Harbor, and was one of a few Army Officers to get a Coast Guard Commendation Ribbon for his work with them. He is however, most proud of all his work for the New Jersey National Guard at Lawrenceville.