Bernard Lauber was born in Clifton, New Jersey in June, 1926, of German heritage.  His grandparents immigrated to the United States from a section of Germany located along the Swiss border.  Lauber grew up in Nutley, New Jersey and was always aware of the news of the world around him.  He recalled being aware of the Hindenburg Zeppelin explosion and crash in Lakehurst, New Jersey, and, in 1939, of the German invasion of Poland, shortly after he graduated from elementary school. He expected to be called into military service as soon as he came of age, especially after his brother was drafted in 1943.  Lauber’s brother was assigned to the Ninetieth Infantry Division and landed on Utah Beach during the Normandy invasion of June 6, 1944.

Lauber was drafted in August 1944, shortly after graduating from high school, and he was sent to Camp Croft, South Carolina for basic and advanced infantry training, which lasted thirteen weeks.  In January, 1945 he shipped out for Europe aboard the British liner Queen Mary, which was performing wartime duty as a troopship. Although only two or three men were assigned to a stateroom, Lauber preferred to take some blankets and sleep out on deck.  The ship landed in Scotland, and Lauber traveled by train to Southhampton and then by ship to Le Havre, France, where he was assigned as a replacement to the Thirty-sixth Infantry Division, originally a Texas National Guard unit.  The Thirty-sixth had been in heavy fighting in Italy on the Rapido River line, and then was pulled out of Italy for the invasion of Southern France.  Lauber was assigned to “I” Company of the Third Battalion of the division’s 141st Infantry Regiment.

Lauber recalled his initial quarters with the 141st as in the cellar of a building also being used as a headquarters. He could hear the sounds of war outside.  The Thirty-sixth Division advanced toward Germany in March, and Lauber remembered pushing through a snow covered landscape that included forests and open farmland, his M-1 rifle in hand and a bandoleer of spare ammunition draped around his neck. It was very cold, and he wore a sweater and field jacket, with his feet encased in heavy socks and rubberized “shoe-pacs.”

Lauber remembered that he had a problem understanding the orders of his platoon leader, a staff sergeant in his mid-twenties, and that there were no maps available, but that the sergeant managed to move his men effectively through the Haguenau Forest, where the Thirty-Sixth Division relieved the 101st Airborne Division in the line.  He recalled being on night patrols, with his face painted black.  Occasionally his patrol would encounter other patrols in the dark; the groups’ clicking sounds of M-1 rifle safeties being pushed off was an indication that they were encountering other Americans. 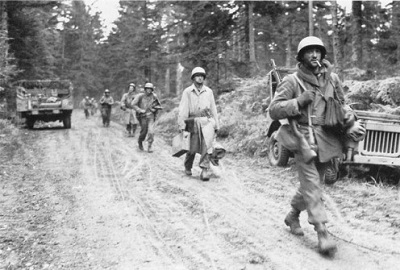 The Thirty-sixth Infantry Division attacked the Siegfried Line – filled with heavy concrete pillboxes – fighting through fanatical SS units and eventually making it to the Rhine River.  As the German defenses collapsed in April, 1945, the American advance accelerated, and Lauber and his comrades outran their cooks and were limited to eating K rations, supplemented by the occasional delivery of cookies from home. Sometimes they were able to heat rations over cans of “Sterno.”

The Thirty-sixth Infantry Division has been recognized by the United States Holocaust Memorial Museum for its role in liberating the sub-camps of the Dachau concentration camp system, and Lauber recalled seeing emaciated liberated prisoners wandering the streets of local towns.  Around this time he was fortunate enough to see two USO shows, one featuring Marlene Dietrich and the other the popular madcap comedians Olsen and Johnson, whose program was called “Sons of Fun.”

With the end of the war in May, Lauber, who had not earned enough overseas “points” to return to the United States yet, remained in Germany as part of the army’s occupation force, where he guarded prisoners, displaced persons camps and ration depots and also participated in house to house weapon searches. Soldiers in his unit heard rumors that anyone goofing off would be sent to the Pacific.  When the Thirty-sixth returned to the United States in December, he was transferred to the Sixth Armored Infantry Regiment and continued on occupation duty.  In the summer of 1946 he was sent to Bremerhaven, Germany, from where he boarded a ship for home, and he was discharged at Fort Dix, New Jersey on July 30, 1946.

Following the war Lauber obtained employment with a German company’s American branch. He traveled to Germany often, since the company’s headquarters was in Munich.  While on business trips he visited a daughter who lived in Germany. At the close of his interview Lauber spoke of his nine grandchildren, one of whom was a history teacher, and showed the interviewer his war memorabilia, including a newspaper article on Marlene Dietrich, and a headline from the Stars and Stripes military newspaper proclaiming “ETO War Ends.”