The 177th Fighter Wing, New Jersey Air National Guard is a community-based force located at the Atlantic City International Airport. The unit flies the F-16C/D aircraft. This version of the “Fighting Falcon” features many new and upgraded aircraft systems. Known as the Jersey Devils, the wing’s federal mission is to provide combat ready personnel, aircraft and equipment for worldwide deployment in support of US Air Force objectives. The 177th’s state mission is to protect life and property, provide disaster relief, and ensure public safety when called upon by the Governor. The wing’s community role is to participate in events that add value to the community. 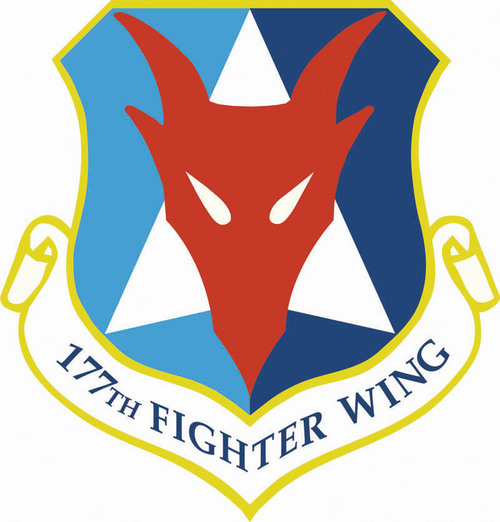 As a result of North American Aerospace Defenses Command (NORAD) tasking, the 177th FW began conversion to the general-purpose F-16 mission on 1 October 1998. This action ended the wing’s 25-year association as part of NORAD’s alert force. During that tenure, the wing’s NORAD responsibility included providing air sovereignty of the mid-Atlantic between Long Island, New York, and the Virginia capes. As of 1 October, the wing entered into its extensive period of general-purpose fighter retraining. In the general purpose F-16 role, the 177th will be capable of assuming a variety of Air Force missions to include overseas deployments and assignments to one of the newly created Air Expeditionary Forces.

The 177th Fighter Wing traces its roots back to September 17, 1917, when it was organized as the 119th Aero Squadron located at Langley Field, Virginia. A few years later the 119th was inactivated and remained inactive until September 1928 when it was reorganized as the 119th Observation Squadron, New Jersey National Guard, at Metropolitan Airport, Newark, New Jersey as an Air Arm of the 44th Division Aviation and received Federal Recognition in January 1930.

In 1934, aircraft of the 119th Observation Squadron were dispatched to the scene of the “Morro Castle”, a ship burning off the coast of Asbury Park, New Jersey. Many hours were spent flying over the ship and adjacent water assisting in the direction of rescue efforts and locating survivors. The 119th Observation Squadron fell victim to the “draft” on September 16, 1940, when it was inducted into active service. The unit continued as the 119th until April 12, 1948, at which time it became the 490th Fighter Squadron. The 490th was disbanded in May 1944 while still at Thomasville, Georgia. It was later reconstituted on June 21, 1945, and redesignated the 119th Fighter Squadron (SE) on May 24, 1946, and allotted to the Air National Guard with P47 “‘Thunderbolts” at Newark, New Jersey.

The 119th moved to the former Atlantic City Naval Air Station, now known as the William J. Hughes Technical Center, on August 5, 1958. This change of station also brought about a change in aircraft to the F-84F. The 119th was called to active duty again in October of 1961, for the Berlin Crisis. The unit remained at home station; however, the pilots were periodically rotated to Chaumont Air Base, France.

In January of 1968, a new crisis, the seizure of the American ship USS Pueblo by North Korean forces, and again the 119th was called to active duty. In May 1968, the 177th TFG/119th TFS was assigned to the 113th Tactical Fighter Wing, Myrtle Beach AFB, South Carolina. Personnel were spread throughout the United States, Taiwan, Korea, and Vietnam with the main unit stationed at the 113th TFW. The 177th TFG/119th TFS returned to Atlantic City, New Jersey, in June 1969, and transitioned into the F-105 ‘Thunderchief” in 1970.

In 1972, Headquarters Air Force announced that the 177th TFG would be assigned to the Aerospace Defense Command and be responsible for protecting the United States from airborne attacks, and so was reorganized as the 177th Fighter Interceptor Group and 119th Fighter Interceptor Squadron. In 1973, the unit transitioned into the F-106 “Delta Dart” and assumed alert status the following year. The Aerospace Defense Command then came under TAC as the Air Defense Tactical Air Command (ADTAC), and then again changed to a numbered Air Force, 1st Air Force.

During 1988, the unit transitioned into the F-16A/B, “Fighting Falcon”, and received an “excellent” rating during its first Operational Readiness Inspection with the F-16 in October 1989.

During Operation Desert Shield/Storm, 73 members of the 177th FIG were called to active duty, and others served as volunteers. Fire fighters and Food Services personnel from the 177th Civil Engineering Squadron, elements of the 177th USAF Clinic, members of the Transportation section of the 177th Resource Management Squadron, and Explosive Ordnance Disposal personnel from the Consolidated Aircraft Maintenance Squadron provided backfill at various bases whose members had been deployed to Saudi Arabia. Those activated from the 177th Security Police Flight served at home station. And the 177th Chaplain’s Assistant completed a five-month tour of active duty in Saudi Arabia. All members were returned to normal Guard status at home base by July 1991.

From January 18-26 and March 14-21, 1998, the wing provided Operational Readiness Inspection support for the 125th FW, based in Jacksonville, Florida. This included six aircraft and 35 support personnel deployed to the Combat Readiness Training Center (CRTC) at Savannah, Georgia. The deployment lasted from January 18 through 26. 177th personnel also provided support for the 108th ARW’s Operational Readiness Exercise from March 14 through 21, also held at the CRTC. The 177th participated in a live missile firing exercise – COMBAT ARCHER – at Tyndall AFB, Florida. 12 pilots and 60 maintenance personnel deployed to support this exercise from February 1 through 14.

On 28 February 1998, two 177th F-16s were scrambled to locate and assist a private pilot who was off course and headed out to sea. The fighter pilots got the wayward pilot’s attention by flying along side him, lighting their jet’s afterburners and flashing its lights. After managing to get the aircraft turning back toward land, the 177th pilots escorted him back to the Atlantic City International Airport. By all accounts, the skill and experience of the 177th alert pilots averted a certain tragedy.

From May 1 through June 13, 1998, the wing deployed five F-16C Fighting Falcon aircraft and 46 personnel to Howard AFB, Panama, in support of OPERATION CORONET NIGHTHAWK. 130 personnel rotated on a two-week basis during the six-week deployment. Operating as part of a joint interagency task force, the wing’s role was to detect and identify suspected drug smuggling aircraft. Once identified, the suspected aircraft are turned over to law enforcement agencies for apprehension.

The 177th’s Civil Engineering Squadron (CES) conducted a bivouac and training exercise at the wing’s cantonment area on 6-7 June 1998. This was part of the CES Prime Base Engineering Emergency Force (Prime BEEF) training that emphasizes worldwide deployment capability. Members from CES, Services Flight and the Medical Squadron were involved in various wartime exercise scenarios. During the exercise, Services Flight provided three meals per day while setting up a tactical field exchange; handled billeting; conducted mortuary exercises; exercised self-aid and buddy care skills. Built into the exercise was the test and practice of field construction skills. Squadron members were given construction tasks often lacking the necessary tools and equipment in order to reflect wartime conditions. The airmen were then evaluated on their construction ability and resourcefulness.

August 8 through 22, 1998, saw the wing’s Medical Squadron deployed to Aviano Air Base, Italy. This mission provided the squadron with experience in worldwide deployment and wartime mission training alongside their active-duty counterparts. While at Aviano, Medical Squadron personnel received recertification training, including advanced cardiac life support certification, cardiopulmonary resuscitation and emergency training. The peacetime mission of the Squadron is to train health care personnel for disaster relief in the event of a natural disaster or other mobilization.

From August 29 through September 12, 1998, the CES deployed to Bagottville, Quebec, Canada, to assist in a series of construction projects. Bagottville is located 150 miles north of Quebec City and serves as the Canadian Air Force Academy’s summer training site. The construction projects included the renovation of the main hangar, administration space, support buildings, drainage projects, and concrete-slab work. Along with the CES team, six members of the Services Flight provided food service support to the Canadian Air Force.

The Readiness Office developed and conducted extensive Weapons of Mass Destruction (WMD) awareness training courses during 1998. These exportable courses were given to hundreds of potential first responders. In 1998, the wing assumed the role of primary National Guard support for the Atlantic County Emergency Operations Center, located in Egg Harbor Township. As part of the NJNG’s Emergency Management Office through the Emergency Operations Center, the 177th serves as the staging area for Task Force South. Task Force South is a combined NJNG element that provides emergency transportation and support to local authorities. 177th County Assistance Team personnel have been instrumental in the development and shaping of Domestic Emergency Operations Center plans to include Year Two Thousand readiness and WMD contingency planning.

On 21 May 1998, the wing conducted a four-hour WMD first responder awareness course for 20 Atlantic County and New Jersey emergency management personnel. By federal mandate, the Domestic Preparedness Program on WMD was developed to provide police, fire fighters and medical personnel with training to respond to nuclear, biological, and chemical terrorist acts. The National Guard Bureau, in conjunction with other federal agencies, is providing 120 cities with training on nuclear, biological and chemical agents ranging from awareness to the incident command level. 177th personnel conducted 12 Weapons of Mass Destruction training courses for first responders.

EOD was very active throughout 1998 supporting local law enforcement agencies. The EOD team serves Atlantic, Cape May, Gloucester and Ocean Counties. As one of only 10 EOD teams in the entire Air National Guard, the 177th EOD specialists responded to numerous “live ordnance” and improvised explosive device (IEDs) calls during 1998. Perhaps the most challenging call of 1998 came when the team responded to the Millville home of a deceased photographer on February 5. The 22-hour ordeal began when Millville Police called for assistance with a house containing nitroglycerine, picric acid, hand grenades and various IEDs. The EOD team’s technical expertise, coolness under pressure, and perseverance resulted in all devices and materials being rendered safe.

On 10 June 1998, the EOD team conducted an eight-hour explosive entry course for members of the Egg Harbor Township Emergency Response Team. The training session included a terrorism briefing, instruction on improvised explosive devices, and explosive entry techniques. On October 6, the team recovered in excess of 100 rounds of World War II era 20-mm high-explosive ammunition from a Cape May fishing boat that had picked up the deteriorating rounds in its nets. In addition, EOD demilitarized F-14 aircraft in Schenectady, New York in January; safed a grenade and recovered an F-16 ejection seat in April in Cape May; performed range clearance at the Warren Grove Gunnery Range in May and dealt with a bomb threat at Pleasantville High School in October.

In another recommendation, DoD recommended to realign Portland IAP AGS, OR. It would realign the 142nd Fighter Wing (ANG) by distributing the wing’s F-15 aircraft to the 177th Fighter Wing (ANG), Atlantic City, NJ (six aircraft) and another installation. This recommendation would realign Portland’s F-15 fighter aircraft to an installation of higher military value. Atlantic City (61) ranked higher than Portland (77) for the fighter mission, and realigning Portland’s F-15 aircraft to Atlantic City would help to create an optimum-sized fighter squadron (24 Primary Aircraft Assigned). Although the ANG would continue to support an alert commitment at Portland, the Air Force determined it was also a priority to support North American Defense Command (NORAD) and United States Northern Command (USNORTHCOM) air sovereignty alert requirements at Atlantic City and New Orleans. Creating effective sized squadrons at these reserve component locations would ensure the Air Force could maintain trained, experienced pilots and maintenance technicians, and would be able to fulfill its Homeland Defense alert requirements.